The Entanet team comprised a mix of men and women from various departments within the company, including two even completing the challenging run dressed as Tyrannosaurus Rex dinosaurs.

Stephen Barclay, Entanet Sales Director, who was one of the team, said: “The course certainly lived up to its name – it was really tough and very muddy, but it was also a lot of fun. It’s not easy running and getting over obstacles around a muddy and slippery, five-mile long course – it required real team-work and camaraderie. You genuinely couldn’t complete some of the obstacles alone and it was great to see the team working together and also helping complete strangers. It must have been particularly difficult for our T-Rex duo, who really went above and beyond to support Sands. However, it was well worth the effort to raise money for such a special charity.”

The Entanet team is still accepting donations on its Just Giving web page at https://www.justgiving.com/fundraising/teamenta and is hoping to reach its £6,000 target for the charity by the 24th June. To help hit the target staff have been running a number of other activities, including ‘fun days’ at its Stafford Park offices, which have included arm wrestling competitions, a baby photo quiz, ping-pong challenge, pub quiz and more.

Entanet is one of the UK’s leading providers of wholesale voice and data connectivity services. The firm employs just over 100 people at its office at Stafford Park in Telford.

Picture (click to open, click again to download and save):  The Entanet Tough Mudder team are aiming to raise at least £6,000 for the Sands stillbirth and neonatal death charity. 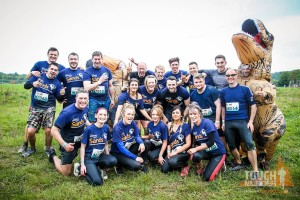