Warrington, 13 June 2018 – Synaxon UK, the leading channel services group, underlined the critical importance of managed services to the future prosperity of its members at its annual members conference, which was held at the International Conference Centre in Telford last week.

More than 400 attendees gathered at the event, which has become a major item on the IT and office products trade calendar, to hear leading industry speakers talk about their view of the market, with former Gadget Show host Jason Bradbury making a guest appearance to give his insight on technology futures and artificial intelligence.

While AI was the theme of this year’s event, delegates wanted to talk about the growth and potential of managed services, collaboration and team working, said Derek Jones, Managing Director of Synaxon UK. “Everyone is talking about managed services. They are becoming integral to all our members and they are very much a part of Synaxon’s and the channel’s future. We have seen that reflected in the uptake of our SynMSP membership category this year. There are big opportunities and we will be doing everything we can to help our members take them.”

The group used the conference to hold a meeting of its SynMSP advisory board, which it now runs each quarter. It is very much a ‘for members and run-by- members’ approach with the group, said Jones, and he sees that as the way forward. “Collaboration, sharing ideas and working together in co-operation is what Synaxon is all about at its core, and the inspiration that members get from being part of Synaxon was there for all to see at this year’s member conference.

There were presentations from Microsoft, HP and BT, services automation specialist Datto, and CloudBlue – the cloud arm of distributor Ingram Micro. Jason Bradbury gave a hugely entertaining talk on the exponential growth of computing power and the incredible power of AI and robotics that are now emerging as a result. Impressively, he had taken a break from the year-long trip around the world he is currently taking with his family and flown to the UK from Italy specifically to take part in the Synaxon Conference (see https://www.youtube.com/watch?v=555axF42Dq8).

Terra Computers sponsored the Synaxon Awards, presented at the conference Gala Dinner. Alicia Shepherd, Sales Director of Terra said: “We were delighted to sponsor the Synaxon Awards for 2018. Many of their members are also Terra resellers and it’s important to recognise the contributions that both they and supplier partners make to the community as a whole.”

Members who attended agreed that it was time well spent. Mike Hoffman, managing director of Edinburgh-based MSP, Drum Brae, said: “It is always well worth the time and effort to attend the Synaxon Conference. Its usefulness extends well beyond getting an update on the group itself and taking the pulse of the industry. We often strike up new relationships, pick up new ideas and hear about new initiatives that have a real impact on our business over the next year – that’s certainly been the case this year”

Suppliers were also pleased with the results. Rebecca Benzie, Head of Sales SMB at Ingram Micro, said: “We are grateful to Synaxon for putting on such a fantastic event”, she said. “The venue and the attendance were exceptional and the evening entertainment was brilliant – there were plenty sore heads on Friday. We were delighted to win an award and will make sure it is prominently displayed in our reception.”

Yemi Elegunde, Channel and Distribution Sales at Western Digital, added: “It’s always a good event and this year was no different. The exhibition area has been really busy and there was a very positive atmosphere. There’s plenty of time and space to network and talk. That’s very important because, in the end, the IT trade is still a people business.”

John Carter, Managing Director of DMSL, a Premier Partner of BT, agreed. “The Synaxon Conference brings people together in a way that no other event can. We’ve certainly got a lot out of it – both in terms of opening up new potential partnerships and renewing old ones. It’s really important for us and for partners like BT to show that we are here and ready and eager to do business with partners – and that we have a great proposition to offer them.”

Pictures:
1 (left to right) Derek Jones and Jason Bradbury with Pepper the robot. 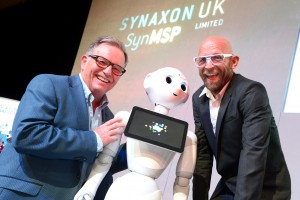 2 Winners of the Synaxon Special Recognition award celebrate their achievement. 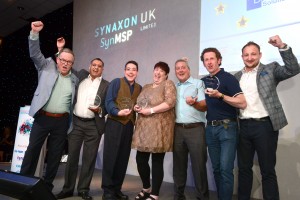