Warrington, 23 May 2018 – Synaxon is looking forward to putting on its biggest and best annual member conference to celebrate its tenth year of operating in the UK. The channel services group has lined-up Microsoft, Ingram Micro UK, Datto and DMSL with BT as the main sponsors, and Terra Computer UK sponsoring the evening gala dinner and awards.

Other leading names supporting the event and running workshop sessions include Western Digital, F-Secure, Continuum, Tenda, Retrospect and G-Data. Exhibitors will include Connectwise, Kingston, Epson, D-Link, Lexmark and a broad spectrum of other supplier and services partners. In total, more than 50 companies will be exhibiting at the event.

Keynote speakers from the main sponsors will join this year’s celebrity guest speaker, Jason Bradbury, who is best known as the enthusiastic technophile presenter of The Gadget Show, and Chrissy Bray, who is hosting this year’s dinner and awards presentation, as well as providing her own special brand of vocal and interactive entertainment, as this year’s on-stage attractions.

As usual, the formal presentations will be completed by lunchtime on the first day with the remainder of the two-day event reserved for workshops, one-to-one meetings, networking and the special guest presentation. Synaxon will shortly be releasing its app which uses artificial intelligence (the theme of this year’s event) to match-up prospective partners and enable easy booking of one-to-one meetings and workshops. The ability to hold private meetings with suppliers is one of the most attractive aspects of the event for many attendees.

The Gala Dinner and awards ceremony on the first evening is also a highlight. This year’s Synaxon UK Awards will see the best-performing companies in the community recognised for delivering great service, achieving exceptional performance and raising standards. Both supplier and member awards will be presented and with Chrissy Bray hosting, we can expect the eventing to be dynamic and highly interactive.

Mike Barron, Channel Director at Synaxon, said: “The momentum is building up nicely. We are really looking forward to welcoming both current and prospective members this year. We have a really inspiring line-up of speakers and it will – as it always is – be the biggest and the best networking event of the year for the channel. We expect even more one-to-one meetings to be organised this year and with the extra space and facilities we have on site, that we’ll see even more interaction between members and suppliers.”

This year’s Synaxon UK Member Conference takes place at the Telford International Centre on Thursday 7th and Friday 8th June.  It is free for subscribing Synaxon members to attend and a limited number of tickets are also available for non-members attending the daytime conference. More information is available from the Synaxon UK team on: 0300 304 5844 or email accountmanagers@synaxon.co.uk. 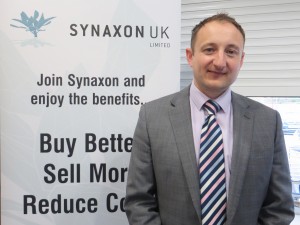