When donations from members and supplier partners attending the event were added to the €1000 given to the charity by SYNAXON itself, the total came to £2005.00. The money was raised through donations made and pledged at the Gala Dinner and awards ceremony, which was sponsored by Ingram Micro. The distributor is one of SYNAXON UK’s key partners and adopted Harry’s Rainbow as its Charity of the Year for 2019 and 2020.

The Milton Keynes-based charity supports children who have been bereaved of a parent or sibling. It provides information and guidance, activities and trips, as well as access to support groups and individual tailored support.

Mike Barron, Channel Director of SYNAXON UK, said: “We were delighted to be approached by Ingram Micro to see if we could raise some money for Harry’s Rainbow.  It’s such a great cause and one that is often over-looked. Our members dug deep and we raised a fantastic amount on the night.”

Odette Mould, CEO and Family Liaison Officer at Harry’s Rainbow, said: “We’re tremendously grateful to everyone at SYNAXON UK and Ingram Micro for giving us the opportunity to raise awareness about Harry’s Rainbow, and we’re thrilled that they managed to raise so much on the night. Every donation counts and makes a real difference for the children we support.”

More information about Harry’s Rainbow is available at www.harrysrainbow.co.uk. 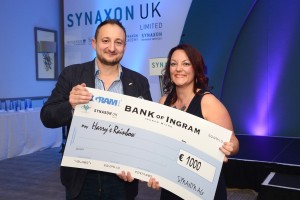